Analysis: The climate papers most featured in the media in 2020

This article, guest authored by Robert Sweeney was originally published on the Carbon Brief website on Jan 13, 2021. The first part of the article is reposted below in. Click here to access the complete original article and comments posted on Carbon Brief. 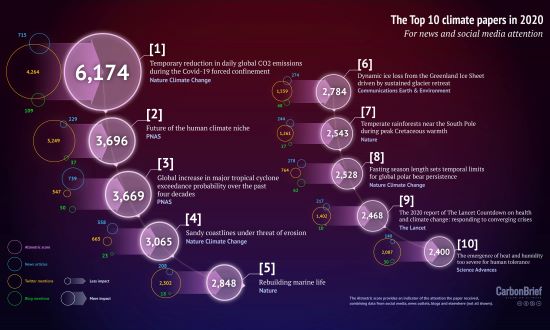 Last year was meant to be very different. The lead up to the fifth anniversary of the Paris Agreement was marked out by many as the year for climate action. Indeed, 2020 followed a year where climate change had been propelled onto newspaper front pages by Greta Thunberg, school strikes and Extinction Rebellion.

But, as with many aspects of 2020, the Covid-19 pandemic soon took centre stage.

As normal life was turned upside down, newspaper headlines and social media conversations were dominated by lockdowns, vaccines and infection rates.

Yet there was still space to report on climate change. And thousands of newly published peer-reviewed climate papers vied for media attention throughout the year.

These studies were covered around the world in news articles and blogs. They were also shared on social media platforms, such as Twitter, Facebook and LinkedIn.

Tracking all these “mentions” was Altmetric, an organisation that scores and ranks papers according to the attention they receive. (Full details of how the Altmetric scoring system works can be found in an earlier article.)

Using Altmetric data for 2020, Carbon Brief has compiled its annual list of the 25 most talked-about climate change-related papers that were published the previous year. The infographic above shows which ones made it into the Top 10, while the chart at the end of the piece shows which journals feature most frequently in the Top 25.

Top spot in a Covid year

In the six years that Carbon Brief has been undertaking this annual review, 2018 was the first year where a paper – on any topic – hit an Altmetric score of more than 10,000. In 2019, Altmetric found two papers that passed this milestone.

It is, perhaps, no surprise then that the top climate paper of 2020 was also about Covid-19. It was the Nature Climate Change paper, “Temporary reduction in daily global CO2 emissions during the Covid-19 forced confinement”, by Prof Corinne Le Quéré, a Royal Society research professor of climate change science at the University of East Anglia, and colleagues.

In addition to covering the study, Carbon Brief also hosted a webinar on the impact of the Covid pandemic on CO2 emissions, with Le Quéré as one of the panellists.

The paper clocked in with an overall Altmetric score of 6,174. It was mentioned in 715 online news stories by 398 outlets, in 109 posts from 63 blogs, and in more than 4,000 tweets – the most of any climate paper published last year for these categories. 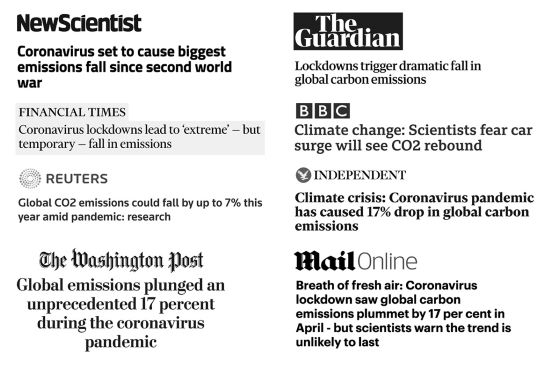 In another example of 2020 being such a remarkable year, this top climate paper is the 140th highest ranking of all papers scored by Altmetric. By comparison, in 2019, the top-ranked climate paper was the seventh highest overall.

(Update: Altmetric has now published its Top 100 papers for 2020. It ranks the Le Quéré et al. paper in 12th place. The higher ranking is because Altmetric changed their methodology this year – rather than taking the 100 highest-scoring papers, they have selected the five top-scoring papers across 20 categories to give them a Top 100.)

The next highest scoring climate paper of 2020 was a short “News & Views” piece called “Record-setting ocean warmth continued in 2019”, published in Advances in Atmospheric Sciences, with a score of 3,954.

The paper presents new ocean heat content data, which revealed that “the world’s oceans in 2019 were the warmest in recorded human history”.

However, because the paper is an invited commentary rather than a traditional research paper, it isn’t included in Carbon Brief’s leaderboard.

(Commentaries are typically commissioned by journal editors, rather than being part of an open submission process. They are also not routinely peer-reviewed. Carbon Brief does include review and perspective articles in the leaderboard, however, as these tend to follow a more traditional editorial process, though this varies by journal. For more on the different types of journal articles, see the guidelines given by Nature and Science as examples.)

Instead, taking second spot with an Altmetric score of 3,696 is “Future of the human climate niche”, published in the Proceedings of the National Academy of Sciences (PNAS). Its lead author is Dr Chi Xu, an ecologist at Nanjing University in China.

The study shows that, for thousands of years, “humans have concentrated in a surprisingly narrow subset of Earth’s available climates, characterised by mean annual temperatures around 13C”. It warns that between one and three billion people could be left outside this “environmental niche” in the next 50 years, depending on the rate of warming and population growth.

The paper was covered by 229 online news stories from 175 outlets across the world, including the New York Times, USA Today, CNN, Guardian, BBC News, Independent, Sun, Times of India, South China Morning Post and Der Spiegel. It was also picked up by 37 posts from 29 blogs and tweeted more than 3,000 times.

In a piece for the Conversation, University College London’s Prof Mark Maslin described the study as a “brilliant thought experiment”, but highlighted some reservations, including a focus on a “worst case scenario” of climate change and not taking into account of the “dynamic and adaptable nature of human technology and society”.

Taking the final place on the rostrum is “Global increase in major tropical cyclone exceedance probability over the past four decades”, with an Altmetric score of 3,669.

The study finds that major tropical cyclones – category 3 or higher – have become 15% more likely at a global level between 1979 and 2017.

The North Atlantic has seen the most significant increases in cyclone intensity, the study says, with the chances of a major hurricane occurring in the North Atlantic increasing by 49% per decade.

Back in May, lead author Dr James Kossin, a climate scientist at the National Oceanic and Atmospheric Administration (NOAA) Center for Weather and Climate, told Carbon Brief:

“Our analysis finds that the global increasing trend in tropical cyclone intensity has now risen to a point where it is very unlikely to be random, even after addressing known issues with the historical data.”

The study featured in 739 online news articles from 405 outlets, including the New York Times, Washington Post, New Scientist, CNN and USA Today. It was covered by 50 posts from 37 blogs and was tweeted 549 times – the smallest total of any paper in this Top 10. 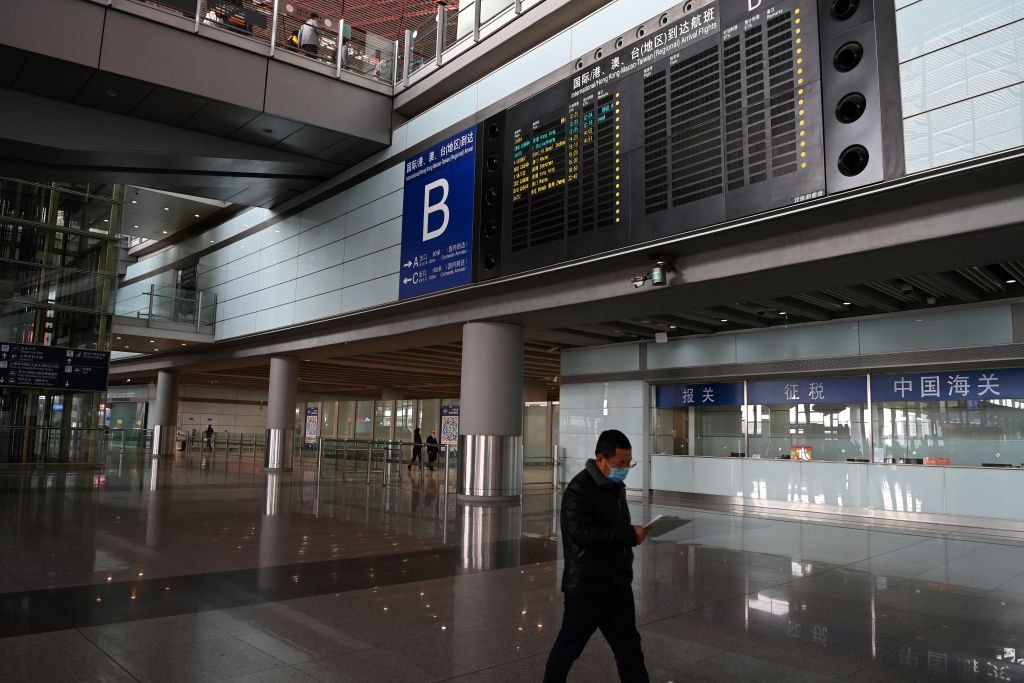