Bellona takes off for Glasgow in an electric car | Bellona.org

On Monday, Bellona set out for the COP26 climate summit in Glasgow in an electric car – of course. Most have heard that electric car sales in Norway are through the roof, but many don’t know is how pivotal Bellona has been in inspiring the Norwegian EV policies that have put the country miles ahead the rest of the world when it comes to phasing in zero-emission solutions in road transport.

We’ll get into the history of our involvement a little later, but first, why did we decided to drive an electric car through Europe to Scotland? It may not come as a surprise that an electric car can do a long trip ­– this trip is almost 3000 kilometers each way and goes through nine countries – but it might not be the first thing you’d think of.

Because, while battery range is no longer the problem it once was, even for cheaper electric cars, it’s the charging infrastructure that is failing to keep pace. There is a certain density of charging stations such that you can get to most places in Europe on one route or another – so long as you don’t swerve too far off the beaten path. In sparsely populated areas, however, the density of charging stations is still far too low, and along the main roads there is a risk of encountering chargers that don’t work, that have long queues, or both.

We’ve encountered these problems in Norway for a while, and now Europe is feeling the same pain. Electric cars accounted for 9.8 percent of all new car sales in Europe during the third quarter of this year. That’ a drop in the bucket when compared to Norway – but in pure volume, those sales equate to 309,000 modern electric cars on the road, all suitable for long trips – and each needing somewhere to charge up.

Bellona is driving a Tesla Model 3 to Glasgow and it has both good range and access to the Tesla charging network. This should make the trip, which in any case runs mostly along main highways, hassle-free. But as we are sure we will see, the charging infrastructure is not up to handling the huge number of EVs that will soon be rolling on European roads.

So, we’re taking this trip to shed light on the challenges Europe still faces as it transitions to electromobility for both large and small vehicles. Additionally, we’ll make stops along the way to talk about other climate solutions. You can follow the journey in our social media.

But back to the starting point: How has Bellona put its fingerprints on Norwegian electric car policy?

We’ve actually been working for an electric cars transition since 1989, and we deserve much of the credit  – or blame, depending on your point of view – for the special treatment these environmentally friendly cars receive today. 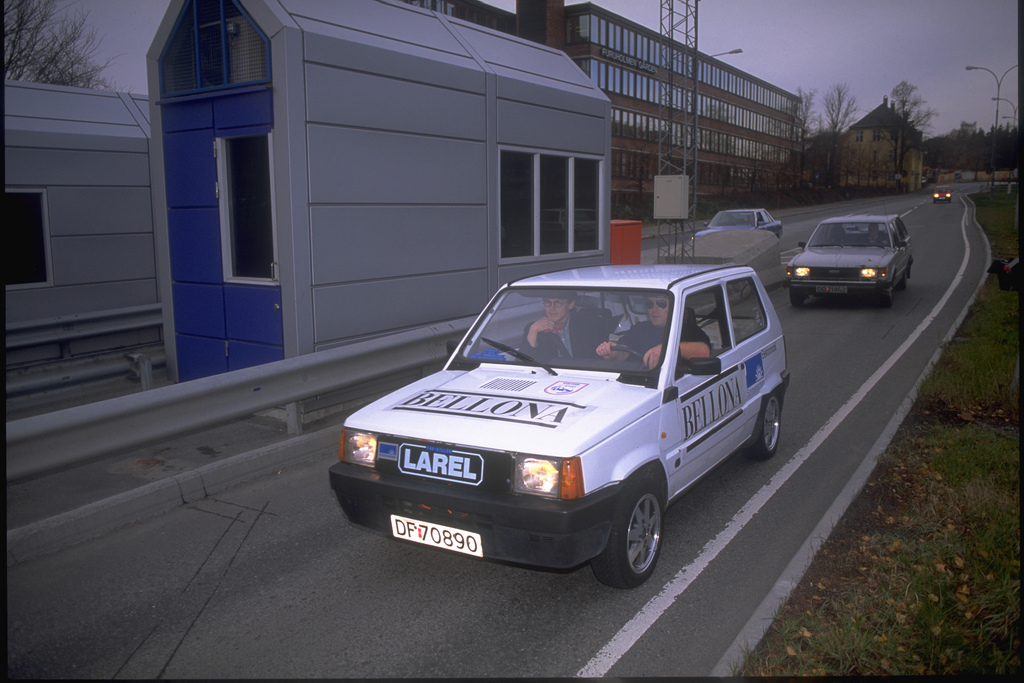 It was a nightmare to get it approved by the Norwegian bureaucracy, but the authorities loosened up partly because A-Ha, the mega-popular 80’s heart throb band, was involved in helping spread the word.

First, Bellona’s electric car had to be registered as a diesel-powered caravan because it didn’t run on petrol, but had a propane-powered heater like in a caravan.

But the registration meant more fuss that led Bellona to civil disobedience. Bellona leader Frederic Hauge routinely drove the car through Oslo’s daunting gauntlet of tollbooths without paying. He thought a zero-emissions car should be able to pass through them for free. 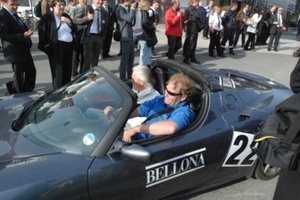 Meanwhile, the car had to be charged, and we typically did this via an extension cord out run out a window at the Bellona office in Oslo.

All of this bad behavior eventually meant that the car was impounded by the authorities and sold at auction. And Bellona bought the car back again and again. In the end, the politicians relented. From then on, electric cars operating in Norway have been able to travel toll roads at no cost.

Soon everyone will drive an electric car

And Bellona has continued to drive the EV conversation. When Tesla entered the Norwegian market with the Roadster in 2009, Hauge was first in line.  Slapping the Bellona logo on the side, we took key politicians for a spin, wowing them with the silent drive and the massive zero to sixty pick up.

Four years – and a climate agreement – later, Hauge was the first in Norway with a Tesla Model S. He says that, with an adequate charging infrastructure and cars with long range, everyone will be driving electric cars within a few year.

Since then, Bellona has helped pave the way for access to public transport, free parking and free ferry trips for EVs, and for tax incentives and other benefits that make electric cars about 30 percent cheaper than their fossil powered counterparts.

In September 2021, electric cars accounted for 78 percent of new car sales sold in Norway. The rest of the sale went predominantly to plug-in hybrids that are mainly sold in the company car market, where the electric car incentives are less robust and customers do not have to worry about poor resale value.

It is important that EV sales reach almost one hundred percent as soon as possible. Statistically speaking, a new internal combustion engine car sold today will contribute to global carbon emissions for the next 15 to 20 years before it’s eventually scrapped. And it will take time to fully electrify the world vehicle fleet. Behind Norway’s impressive EV sales figures lies the fact that, as of the end of 2020, only 12 percent of the total number of cars on Norwegian roads were electric.

Other countries are catching up

Norway is still in the driver’s seat as a world leader in electric cars, but there is still a long way to go. The national goal is that no new pure petrol or diesel-powered cars be sold in Norway by 2025. It remains for the Parliament to decide.

China, on the other hand, is pushing harder with a number of measures for car manufacturers and taxes similar to the Norwegian ones. They’re also  building millions of charging points. And they produce their own electric cars that they believe can outperform the Tesla.

Russians get the juice

Bellona’s push for electric cars has crossed the border. In 2017, we donated a charging station to the city of Murmansk, marking the first EV charger in northwestern Russia. The charger opened to fanfare and curiosity, and it was later awarded as the “Best Foreign Initiative 2017” – Russia’s year of the  environment. 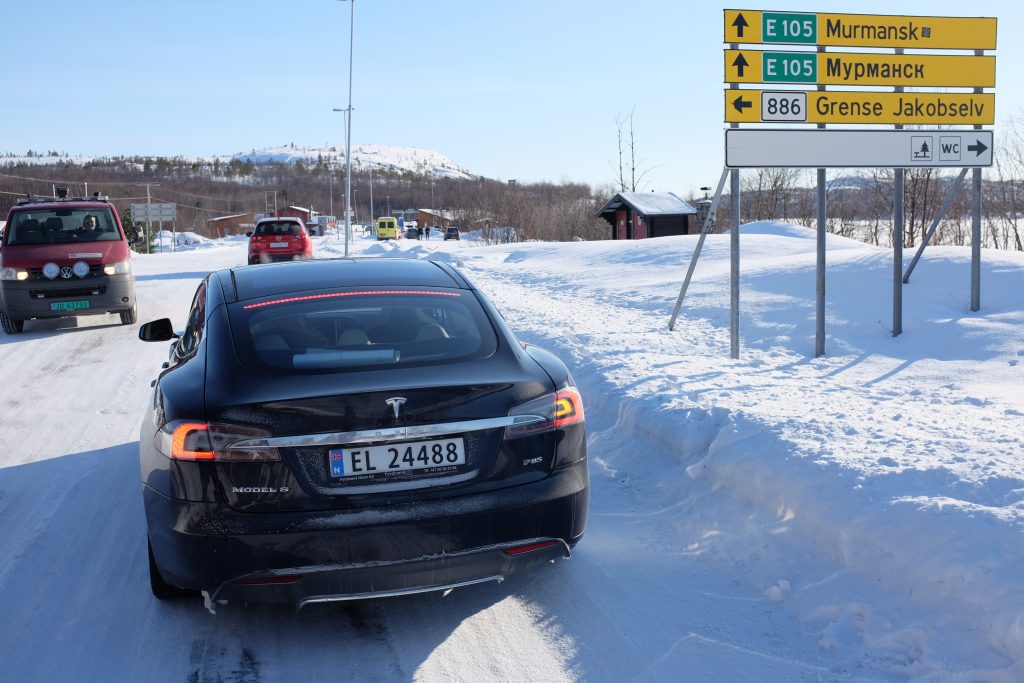 In November of the same year, Bellona and the Deputy Governor of the Murmansk region signed an agreement to accelerate the development of charging stations in Northwest Russia – a nod to the need to get more Russian cars running on electricity.

The latest news from Bellona’s Russian electric car work is that the construction of a fast charging corridor between Murmansk and St. Petersburg ­– a stretch of 1,350 kilometers – has now begun.

More and more car manufacturers are launching targets for phasing out internal combustion engines in their production. These companies are experiencing pressure from the outside, from organizations like us. But market factors are also at play as the batteries that drive EVs are getting cheaper and more efficient. In the longer run, EVs require much less maintenance than their gas powered cousins. As a result, EVs are cheaper and more reliable. When EV manufactures like Tesla are guaranteeing their products for a million to a million and a half kilometers, there’s little reason to buy a gas-powered car. It’s all only to the environment’s benefit.

The post Bellona takes off for Glasgow in an electric car appeared first on Bellona.org.