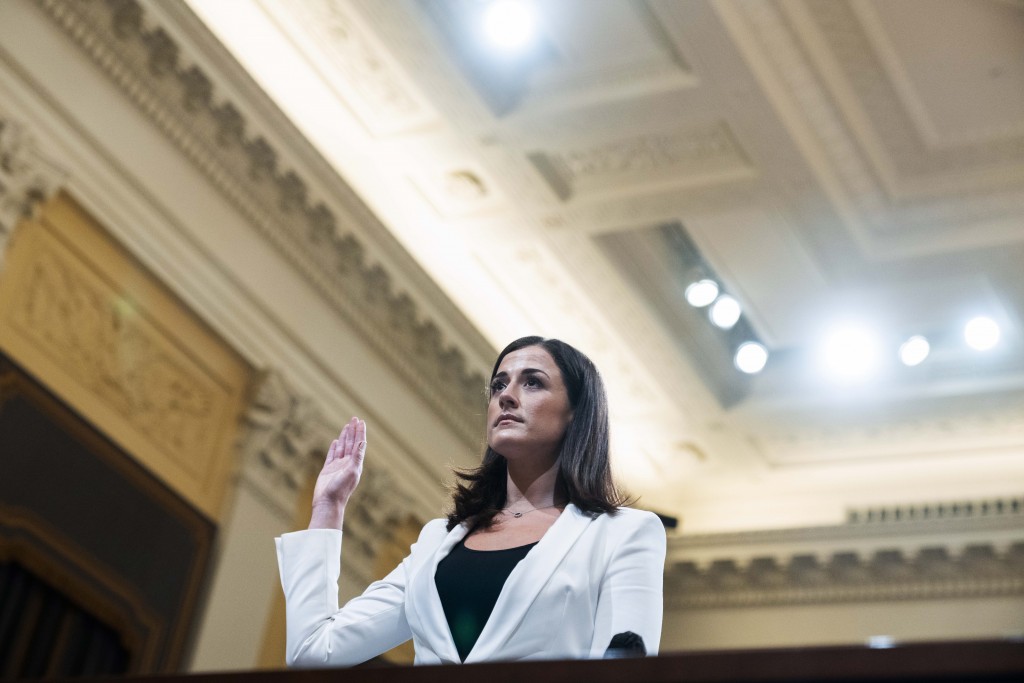 Cassidy Hutchinson is sworn in to the Select Committee to Investigate the January 6th Attack on the United States Capitol hearing on June 28, 2022.

With her surprise testimony at Tuesday’s hearing of the House January 6 committee, former Trump aide Cassidy Hutchinson broke open the inside story of the coup plotting that was underway at the White House before and during the insurrection, and in the process suddenly raised Donald Trump’s legal jeopardy.

Above all, Hutchinson, a former aide to Mark Meadows, Trump’s White House chief of staff, showed that Trump knew that many of his supporters who marched on the U.S. Capitol on January 6, 2021, were armed and dangerous, and still encouraged them to march on Congress. He even sought to go to the U.S. Capitol himself to lead them in person, and lunged at a Secret Service agent to try to take control of his presidential limousine so he could drive up to Capitol Hill to lead the armed mob.

Hutchinson’s stunning testimony, the most dramatic since the House hearings started, recalls that of Alexander Butterfield, the White House aide during Watergate who revealed to the Senate Watergate Committee that President Richard Nixon had a taping system in place in the Oval Office. Butterfield’s testimony suddenly changed the trajectory of the Watergate scandal and helped lead to Nixon’s 1974 resignation.

During Tuesday’s hearing, Hutchinson painted a vivid picture of Trump’s insane behavior as he sought to prevent Joe Biden from assuming office. On the day of the insurrection, Hutchinson testified, Trump tried to force the Secret Service to drive him to the U.S. Capitol to take charge of the insurrection himself. Trump had incited the mob during a speech outside the White House, urging his supporters to go up to the Capitol while Congress was in the process of certifying the election. The crowd then followed his directions and marched to the Capitol.

Immediately after his speech to the crowd outside the White House, he tried to grab the steering wheel of his limousine from the Secret Service agent who was driving.

By that time, Trump was already furious that the Secret Service was refusing to let his heavily armed supporters into the secured area outside the White House. Hutchinson testified that Trump said that “they’re not here to hurt me. Take the fucking mags away,” referring to the metal detectors used to check for weapons. “Let my people in. They can march to the Capitol from here.”

Beyond January 6, Hutchinson also revealed that Trump was mentally unbalanced throughout the months in which he sought to overturn the election. She said that on December 1, 2020, Trump threw a plate with ketchup on it against a wall in the White House when he found out that Attorney General William Barr had just told the press that there was no significant voter fraud during the presidential election. She added that Trump had thrown objects in the White House before, including inside the Oval Office.

Hutchinson also said that Meadows did almost nothing to try to rein in Trump during the insurrection, and later sought a presidential pardon.

Hutchinson’s testimony came as Rep. Liz Cheney, the Wyoming Republican who is vice chair of the House committee, said that there is evidence of witness tampering against others speaking to the committee. Several witnesses have received phone calls and messages in which people tried to pressure them before testifying, Cheney said.

The post Hutchinson’s January 6 Testimony Was an Alexander Butterfield Moment appeared first on The Intercept.