Over the last decade, China has been actively pursuing plans to recycle its spent nuclear fuel. In 2010, it began testing a pilot civilian plutonium reprocessing plant with a design capacity to produce about 50 metric tons of heavy metal per year at the Jiuquan nuclear complex in Gansu province (known as Plant 404). In July 2015, the China National Nuclear Corporation started construction of a larger demonstration reprocessing plant at the Gansu Nuclear Technology Industrial Park in Jinta, Gansu Province, about 100 kilometers from the Jinquan pilot plant. The demonstration reprocessing plant, which has a planned capacity of 200 metric tons per year, is to be commissioned in 2025.

While there was news coverage of the groundbreaking ceremony of the Gansu Nuclear Technology Industrial Park, information on the location and construction progress has been scarce. Limited available information and satellite imagery, however, offer clues about the key facilities under construction.

On August 30, 2017, the head of the company responsible for building the demonstration plant announced the completion of the water supply system for the industrial park. The water pipeline begins at the Jiuquan Plant and ends at the demonstration plant in Jinta county, with a total length of 125 kilometers and elevation loss of 249 meters.

A dedicated highway to the demonstration plant started construction in July 2016 and was completed in October 2017 (ahead of the schedule of June 2020). The road starts at the intersection of Jiayuguan city’s orbital road and airport road (hosting the residence place for employees of Plant 404) and ends at the demonstration plant. The overall direction of the route is roughly from south to north, with a construction mileage of about 61 kilometers. The width of the subgrade is 12 meters. 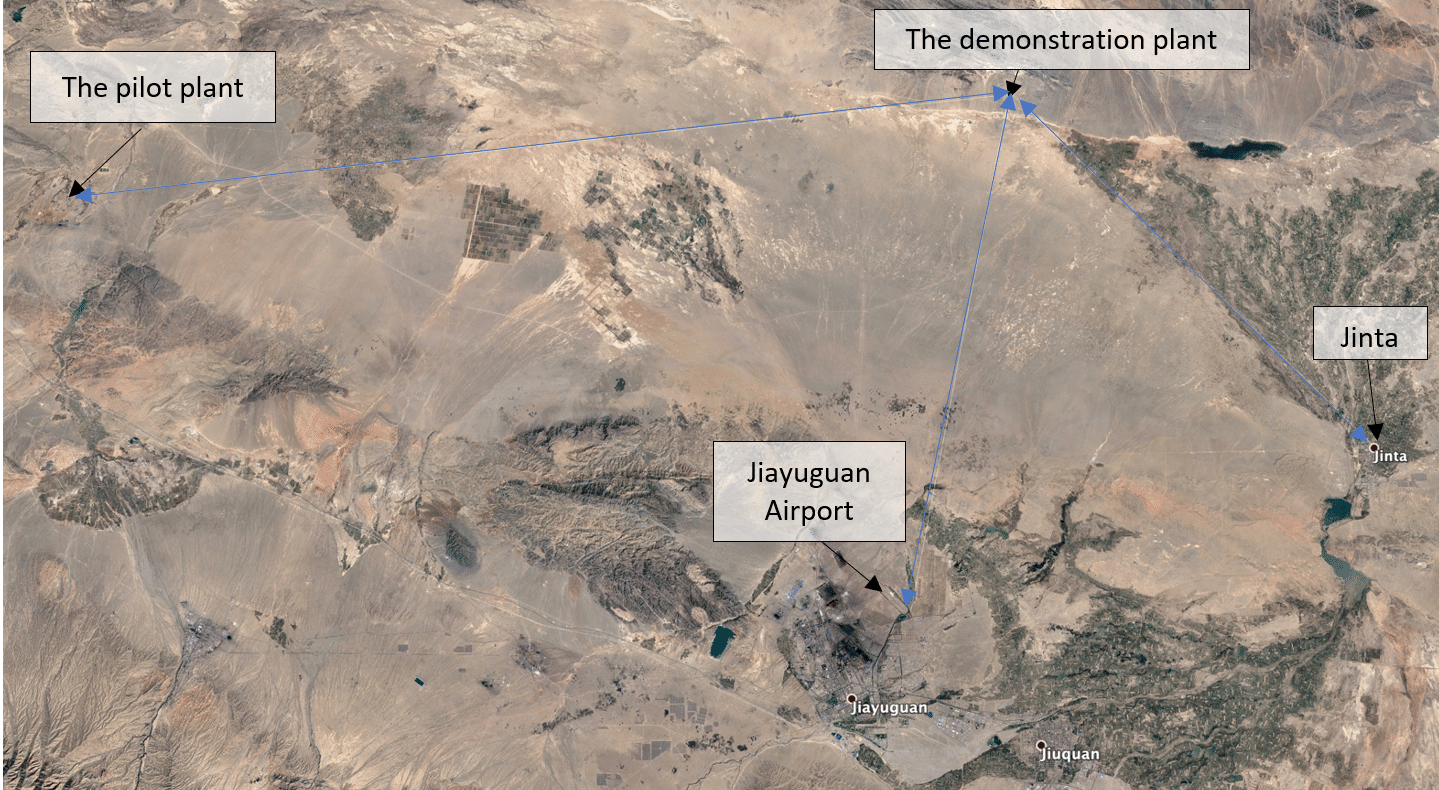 On September 5, 2017, a construction company affiliated with the Chinese National Nuclear Corporation reported that it had successfully installed four liquid natural gas storage tanks at the demonstration plant, providing a backup energy source. The four huge storage tanks can be clearly identified in the satellite images. This information further corroborates the site of the demonstration plant. 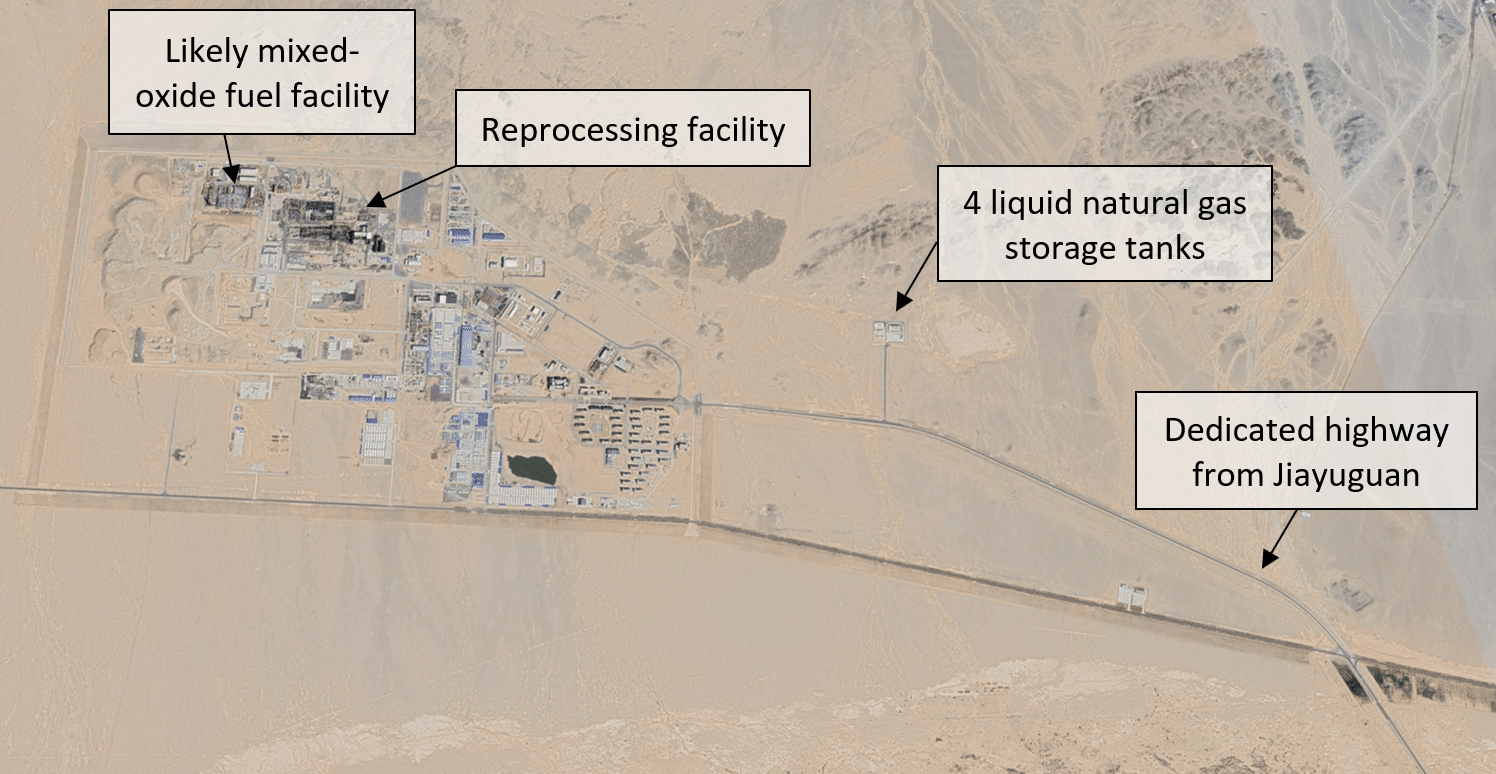 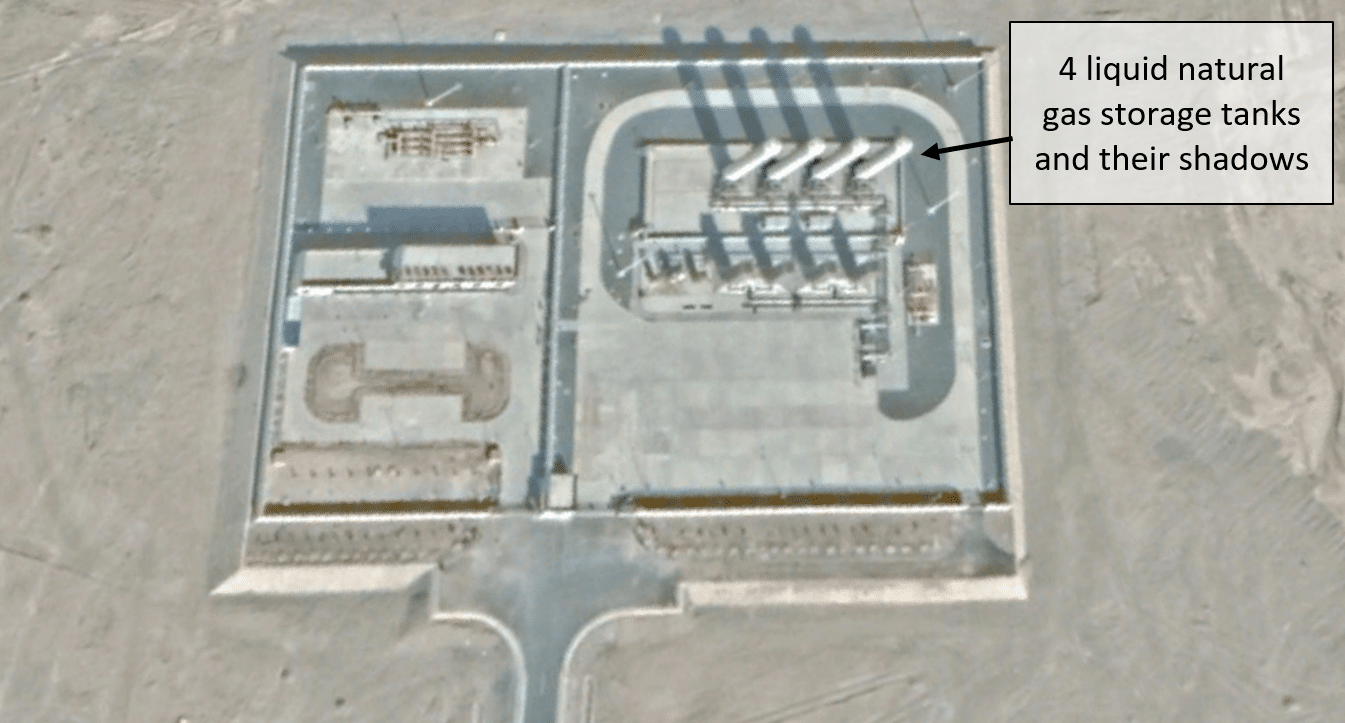 As shown in Figure 4, by August 29, 2019, the thick-walled buildings that will host the spent fuel reception pools were under construction. In that image, a heavy lift overhead crane was likely installed, which would be used to move fuel assemblies into and out of a spent-fuel reception pool. By November 2019, shown in Figure 5, the spent fuel reception pools had been finished with roofs. Also, by then the high stack, a characteristic of a reprocessing plant, had been completed. This may show China is building the plant at a fast pace. The main processing buildings, however, were still under intensive construction. 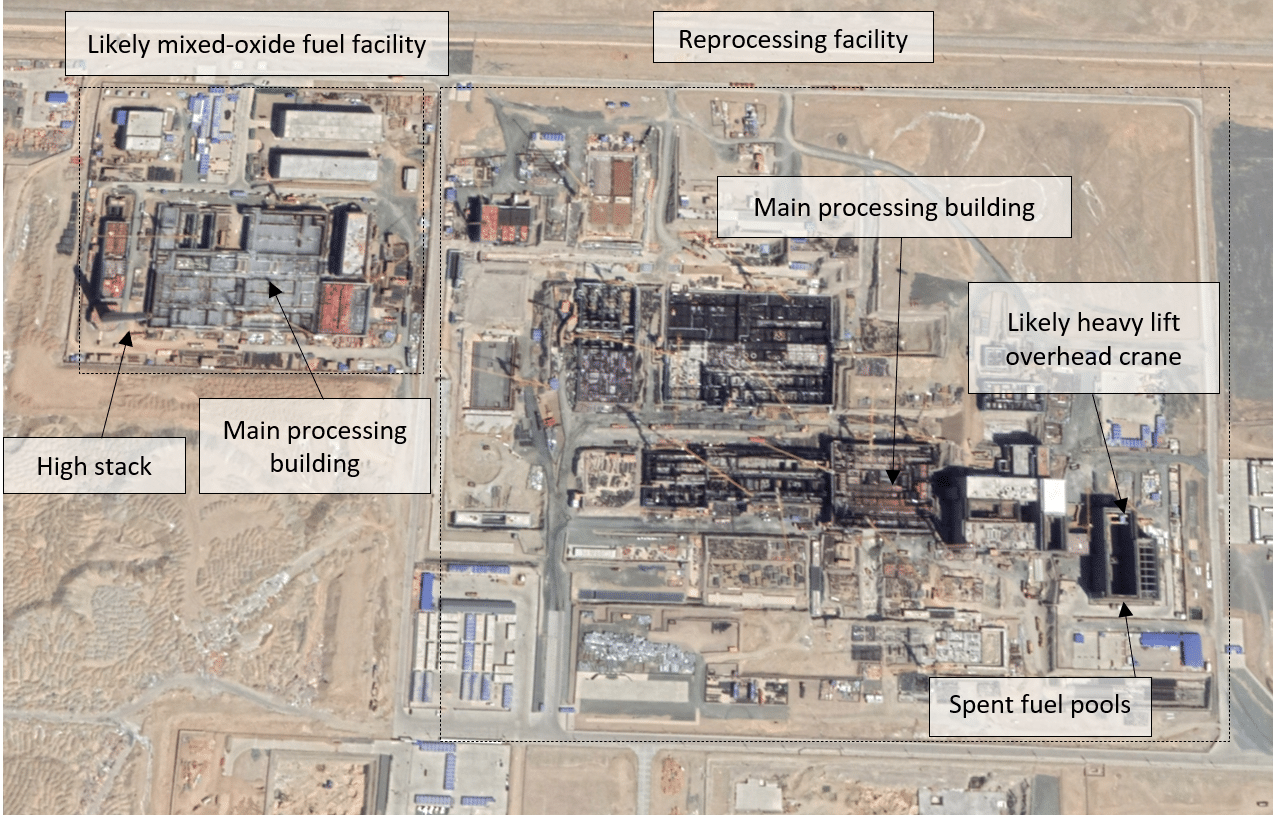 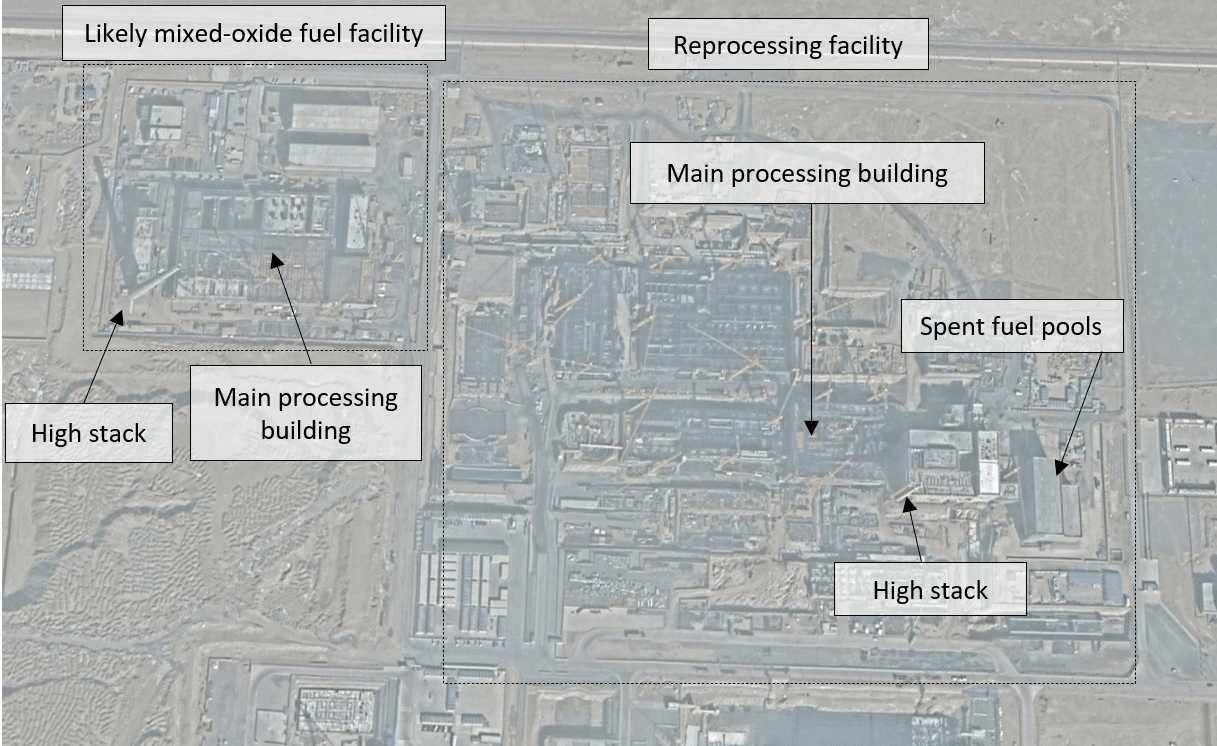 Figure 5: The demonstration reprocessing and mixed-oxide facilities under construction. The high stack is clearly visible in this image. The roofs of spent fuel pools have also been completed. Satellite image from November 3, 2019. Credit: Maxar Technologies and Google Earth.

The China National Nuclear Corporation is also building a demonstration mixed-oxide fuel fabrication line with a capacity of 20 metric tons per year near the demonstration reprocessing plant. On June 3, 2018, the mixed-oxide fabrication plant began construction. As shown in satellite images, by November 2019, the main buildings likely to host the production line were under intensive construction, and the facility’s high stack had been completed.

It is expected the reprocessing and mixed-oxide fuel facilities could complete the civil engineering stage and enter the equipment installment stage in 2020, and can be expected to be operational by 2025. If all goes according to plan, the reprocessing plant will supply plutonium for the mixed-oxide fuels that will power the CFR-600 demonstration fast reactors currently under construction.

Zaporizhzhia on the brink: How deteriorating conditions at the nuclear power plant could ...