The Trump administration thinks it can win an arms race. Time for a history lesson.

It is impossible to respond to every distortion of reality emanating from the Trump administration, but sometimes a statement is so outrageous that it demands comment and correction. Such was the remark of Marshall Billingslea, the Special Presidential Envoy for Arms Control, during a recent online interview with the Hudson Institute. He was promoting the administration’s dubious plan for three-way nuclear arms negotiations with China and Russia, which critics have called a disingenuous ploy to avoid extending the New Strategic Arms Reduction Treaty with Russia, which will expire next year, furthering the administration’s assault on arms control.

When asked about Trump’s previous comment that, if there is a to be an arms race, the United States will win it, Billingslea spoke of a “three-way arms racing context.” The president has made it clear, he said, “that we have a tried and true practice here. We know how to win these races. And we know how to spend the adversary into oblivion.”

The reference to winning an arms race by spending the adversary into oblivion recalls one of the misconceptions of Cold War history. Many believe that it was the US military buildup, especially President Reagan’s cherished Strategic Defense Initiative, that broke the back of Soviet power and forced the Kremlin to yield to American military might. “Ronald Reagan won the Cold War without firing a shot,” Margaret Thatcher famously declared.

It’s a plausible argument, but the real story is more complicated.

First, look at the numbers. Soviet arms spending grew at a steady pace during the Cold War and did not rise or fall in response to American expenditures. Estimates based on CIA figures indicate that the growth of Soviet military expenditures remained constant during the 1980s, or may have declined. The Reagan arms buildup and the announcement of the Strategic Defense Initiative did not cause a major increase in Soviet military spending.

Excessive military spending certainly imposed a burden on the Soviet economy, but this was not the imperative driving Gorbachev and the reformers to introduce their program of perestroika. They sought to overcome their country’s economic backwardness by ending Stalinist centralization and creating a more open society. Demilitarization was part of that agenda, but it was motivated by domestic considerations, not external pressure.

Far from being outpaced by the American nuclear arsenal, the Soviets had a big lead in the total number of nuclear weapons in the 1980s. Their stockpile rose dramatically from the 1970s, reaching a peak of nearly 40,000 weapons by 1986, as illustrated in the chart below. 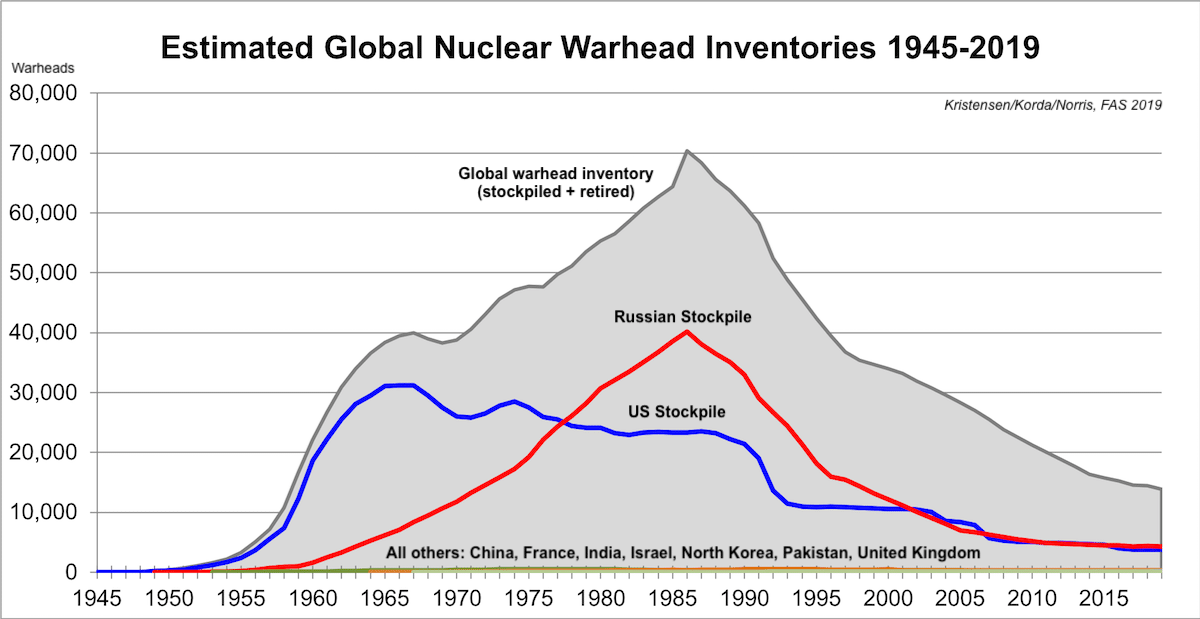 Second, many top officials who experienced the collapse of the Soviet Union firsthand reject the notion that the United States spent the Soviet Union into oblivion. George Kennan considered the triumphalist interpretation “ridiculous.” The general effect of hardline policies, he wrote, was “to delay rather than hasten the great change that overtook the Soviet Union at the end of the 1980s.” Gorbachev himself said it was “a very big delusion.” His politburo ally Alexander Yakovlev said that American pressures “played no role” in the determination of the reformers to transform the Soviet system. “Gorbachev and I were ready for changes in our policy regardless of whether the American president was Reagan, or someone more liberal.” The US military buildup and push for missile defense only complicated the Soviet reform process.

The real “tried and true practice” of the past is not that one can win an arms race—no one can. It’s that negotiated steps toward mutual denuclearization can reduce tensions and enhance security. Let’s send the whole idea of arms racing into oblivion.

The post The Trump administration thinks it can win an arms race. Time for a history lesson. appeared first on Bulletin of the Atomic Scientists.