The UK & Ireland Nuclear Free Local Authorities (NFLA) is concerned to read many contradictory reports over what has been called a ‘radioactive leak’ by some and ‘performance issues’ by others at the Taishan nuclear plant some 100kms from Hong Kong in the Guangdong region of China. NFLA has written to the UK nuclear regulatory, the Office for Nuclear Regulation (ONR), to ask it to investigate this matter with real urgency in terms of the implications for similar reactors being considered for the UK.

The Taishan plants developed in China use the same EPR (European Pressurised Reactors) technology being planned for the Hinkley Point C plant in Somerset and currently being considered in a public inquiry at Sizewell C in Suffolk.

Taishan is a prestige EPR project built after China signed a nuclear electricity generation agreement with ÉDF. Construction started in 2009, and the two units started generating electricity in 2018 and 2019, respectively. It is 70% owned by CGN, and 30% by Framatome, a subsidiary of EDF.

This incident came to light following an investigation by CNN, and it appears to have been going on for some considerable time. 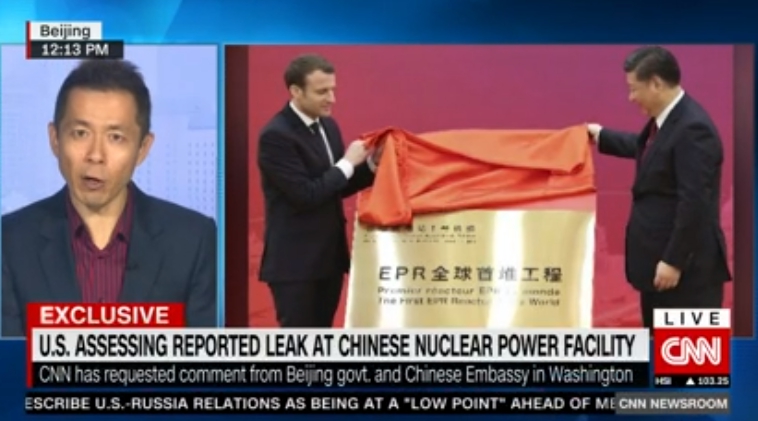 According to the CNN investigation, in late May, one of the EPR reactors started venting radioactive gases – it is not known precisely why or when. The CNN article mentions possible fuel failures, and this is a possibility. It appears the Chinese nuclear regulator and the Chinese Government reacted by proposing to increase the safety limits for residents downwind in order to keep the reactor operating, and they told Framatome of this intention. Framatome objected to such an action and said China should instead shut down the reactor to find out what had gone wrong. The response from Chinese authorities was negative to this suggestion. As a result, Framatome (unusually) submitted an operational safety assistance request to the US Government on June 3rd, formally asking for a ‘legal waiver’ that would allow them to address an urgent nuclear safety matter. This was sent to the US Department of Energy (DOE), warning their officials that the nuclear reactor was leaking fission gas.

On June 8th, EDF asked the US DOE for an expedited review of their request, according to a memo obtained by CNN. “The situation is an imminent radiological threat to the site and to the public and Framatome urgently requests permission to transfer technical data and assistance as may be necessary to return the plant to normal operation” read the memo. Framatome reached out to the US government for assistance, the document indicates, because the Chinese government agency was continuing to increase its limits on the amount of radioactive gas that could safely be released from the facility without shutting it down, according to the documents reviewed by CNN.

Since this report came out, EDF and the Chinese authorities have tried to downplay that any serious incident took place, suggesting these matters were merely “performance issues” within safely levels. It should be noted though that an extraordinary board meeting has been requested by Framatome with its Chinese partners to discuss the matter. (2)

NFLA believe some kind of safety incident could well have taken place at the Taishan reactor, and sincerely hopes that it has not been anything approaching a major nuclear incident. The reaction of the Chinese nuclear regulator is of real concern to us, as is the large level of confusion that has clearly taken place over this incident.

NFLA has written to the UK Chief Nuclear Inspector asking for the Office of Nuclear Regulation to investigate this incident as part of the nuclear regulators’ Multinational Design Evaluation Programme, which includes a working group on the EPR that focuses on reviewing lessons learnt from commissioning, construction and early phase operations. Any concern that comes from this incident needs to be learnt quickly given the development of a similar reactor at Hinkley Point and a proposed reactor at Sizewell. For NFLA, this incident only goes to confirm its concern that the EPR reactor is highly complex and difficult to build, and safety issues could well remain within it.

“The murky details of what has actually happened to one of the Taishan Chinese EPR reactors in this incident is indicative of the lack of transparency that remains in the global nuclear industry. It also shows the real communication problems that can occur between in this case the French and Chinese nuclear companies and regulators. I hope this has not been a serious incident, but the detail initially provided to CNN suggests something has gone wrong and needs to be carefully considered in terms of its impact on this new nuclear reactor. It confirms to NFLA that there remain so many inherent issues in new nuclear that it would be far better to pursue instead safer, cheaper, more easily realisable and radioactive waste-free renewable energy alternatives.”

PODCAST: Perspectives from the Asia Pacific region on the outcomes of the COP27 climate talks

What’s at stake at the CBD COP15